My work has been included in an exhibition about integration at the CAM Museum in Italy.

A handmade poster using my photograph of Matuse – Portrait of a Young Aussie,  has been included in a new group exhibition at the Casoria Contemporary Art Museum, near Naples in Italy. Promoted as the biggest exhibition ever realized on the theme of integration, “You no speak Americano original” aims at highlighting issues of discrimination and racism. It functions as an open call to all artists of any nationality, race, religion, age and sexual orientation to fight against intolerance. The exhibition is curated by CAM museum director Antonio Manfredi, in an institution which often specifically looks at the how contemporary artists view the conflicting worlds of politics, corruption and crime. The publicity poster for the show is in the form of an ironic portrait of Donald Trump as Uncle Sam, recruiting all artists to join his private army of distrust and racism. 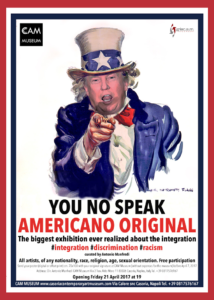 The exhibition “You no speak Americano original” includes posters commenting on the themes of racism and prejudice, made by more than 100 artists, primarily from Italy, but also from Argentina, Australia (me), Austria, Belgium, Egypt, France, Germany, Kosovo, Macedonia, Malta, Norway, Portugal, Romania, Spain, Turkey, UK and USA.

Link to the exhibition

On Friday afternoon I drove down to Canberra with a friend for the launch and announcement of the winner of the 2017 National Photographic Portrait Prize at the National Portrait Gallery,  This year marked the 4th occasion that one of my portraits has been shortlisted as a finalist in the prize.

I really appreciate being selected as part of this exhibition.  It comes with some standing since it’s a National Prize (this year 49 works were selected from a field of 3,000)) and also it takes place in the esteemed premises of the National Portrait Gallery in our nation’s capital, Canberra.  Thank goodness for GPS with all the circular traffic conditions.

As one of the selected finalists, I arrived a 5pm for a reserved viewing of the exhibition.  This meant I had a chance to look at the works hanging in the lofty halls of the gallery without a crowd.  It also gives you a chance to meet some of the other 49 finalists before the speeches and the announcement of the winner.

My selected work is a recent portrait of my friend, Matuse…see below. 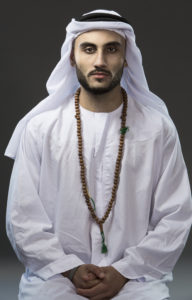 This is a portrait of a young Australian man.  It was taken in my studio earlier this year.

I gave Matuse a bag full of clothing and asked him if he would select a “costume” and put it on, which he did.

In this portrait of Matuse in simple Arab dress, I intentionally depict him  as a metaphor for certain prejudices and negative attitudes, conscious or unconscious, that our society at times has been conditioned to project.  Here, I have purposely but subtly imposed such terms as “radical” and “fundamental” onto my willing subject,  a young man who normally goes about in jeans and a t-shirt

Matuse is of Middle Eastern descent, and he is also a practicing Muslim.  He confronts the camera with openness, calmness and stillness. For him, the clothing is merely fabric, and not a signifier of any political stance or pretext.

At 6pm the doors open to the invited public.  I met Matuse, the model in my portrait, at the front of the gallery, together with a couple of other friends and we entered.

After the announcements everyone was invited into the exhibition area to see the finalists’ works.  It is a great privilege to observe the reaction of the public to your work.  I love over-hearing the comments and looking at the faces of the visiters as they consider the portrait.  Matuse was equally engaged, curiously observing the public’s reaction to his image.  It was fun watching the visiters slowly come to the realisation that the young man wearing jeans and a base-ball cap, standing nearby,  was in fact the stately looking model in the portrait.  Some people asked him questions.   Kuei, the model in the neighbouring work by Kellie Leczinska, then referred to Matuse as “The Prince of Egypt”.

All in all it was a special evening and a great event.  It’s refreshing to see such a high standard of excellence in photographic portraiture showcased in such a beautiful space.  Afterwards all the finalists and their friends were invited to a more relaxed event, so we could meet and mingle, where relationships and new connections can be formed.  The next day several talks were organised at the National Portrait Gallery in relation to the prize.  It was wonderful to hear from the 2017 winner, Gary Grealy, George Fetting (accomplished photographer and 2017 judge) and Elizabeth Looker (2016 winner) at the “Light Effects” talk. 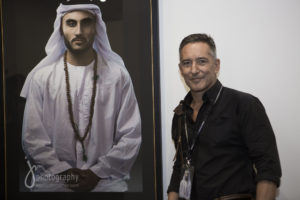 A big thank you to Crowne Plaza Hotel for offering a night at their hotel as part of being a finalist.  Also a big thank you to all the work and creativity by those involved, for establishing such a prize and such a successful event.  This includes the generous sponsors and staff of the NPG, as well as the judges who had their work cut out for them…Penelope Grist, Assistant Curator, National Portrait Gallery; Dr Sarah Engledow, Curator, National Portrait Gallery; George Fetting, guest judge, photographer.

For a look at the ABC news article including an interview with me, follow this link:   http://www.abc.net.au/news/2017-03-31/national-photographic-portrait-prize-artists-explain-their-works/8396770

Don’t forget to lodge your vote for the People’s Choice Award.  You can vote on-line by clicking here  Then click on the button “Vote for your favorite”